A driving motivation for me as a person and philosopher (it’s hard to separate the two, – philosophy has become a part of who I am), is to examine and reflect upon different approaches to life and meaning. What confronts us in life? How do we respond to it? How do other people respond to their challenges and would we do the same?

Last night I felt the need to begin reading Leo Tolstoy’s “A Confession”, an emotionally honest autobiographical piece he wrote in 1879.  I read through the first four chapters. We learn that he acquired a desire for perfection early on in life:

Now, looking back at that time, I can clearly see that the only real faith I had, apart from the animal instincts motivating my life, was a belief in perfection. But what this perfection consisted of, and what its aim was, were unclear to me. I tried to perfect myself intellectually and studied everything I came upon in life. I tried to perfect my will, setting myself rules I tried to follow. I perfected myself physically, practising all kinds of exercises in order to develop my strength and dexterity, and I cultivated endurance and patience by undergoing all kinds of hardship. All this I regarded as perfection.

Yet all was not right. He thought he had understood life and meaning and had striven forward to pursue his perfection, but came to realize that something was wrong:

I cannot recall those years without horror, loathing, and heartache. I killed people in war, summoned others to duels in order to kill them, gambled at cards; devoured the fruits of the peasant’s labour and punished them; I fornicated and practised deceit. Lying, thieving, promiscuity of all kinds, drunkenness, violence, murder…there was not a crime I did not commit, and yet I was praised for it all and my contemporaries considered, and still consider me, a relatively moral man […] These people became repugnant to me, and I became repugnant to myself.

His life came to a standstill. He writes about his striving against life. Now, for those of us who have suffered from severe depression, what he wrote next is something which we can very clearly relate to and connect with:

Life had grown hateful to me, and some insuperable force was leading me to seek deliverance from it by whatever means. I could not say that I wanted to kill myself. The force beckoning me away from life was a more powerful, complete and overall desire. It was a force similar to my striving after life, only it was going in the other direction. I fought as hard as I could against life. The thought of suicide now came to me as naturally as thoughts of improving my life had previously come to me. This ideas was so attractive to me that I had to use cunning against myself in order to avoid carrying it out too hastily. I did not want to rush, simply because I wanted to make every effort to unravel the matter. I told myself that if I could unravel the matter now, I still had time to do so…I was afraid of life and strove against it, yet I still hoped for something from it.

And this is where I left off last night. I am about to begin the chapter where he begins to engage with philosophical questions of meaning more directly.

His is a most interesting story. Many people seek money and fame. They think that this will make them happier. Yet, we are told by psychologists and philosophers that having everything (money, power, influence) is something that can lead to disappointment, and causes you to continue seeking more when you don’t need it. Tolstoy seemed to have lived this. He had  the things he wanted – or could get them if he needed to – yet he suffered from depression, and sought less so that he could live more.

The reading I’ve been doing comes from the Penguin Classics edition of “A Confession and Other Religious Writings”. If what you’ve read here has interested you, I encourage you to seek out the book. 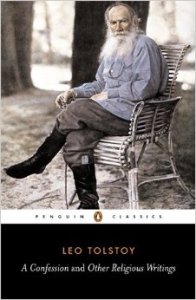 Connoisseur Wanderlust
From the Sorcerer's Scroll

A geek's musings on the games he loves to play

The Musings of Galina Krasskova

Musings of a Vanic Priestess (Freya: The Gold Thread)

A personal journal to share my artistic works, to write about Norse shamanism and traditional paganism, European History, Archaeology, Runes, Working with the Gods and my personal experiences in Norse shamanic practices.

Children of the Ampersand

Skulls in the Stars

The intersection of physics, optics, history and pulp fiction

Deeper Into The Dungeon

A Millennial who loves dungeons deals with OSR RPGs

Putting the Sagas of the Icelanders on trial

If you follow the map where will it lead?

Roll Dice. Kill Monsters. Take Their Stuff. And Have Fun!